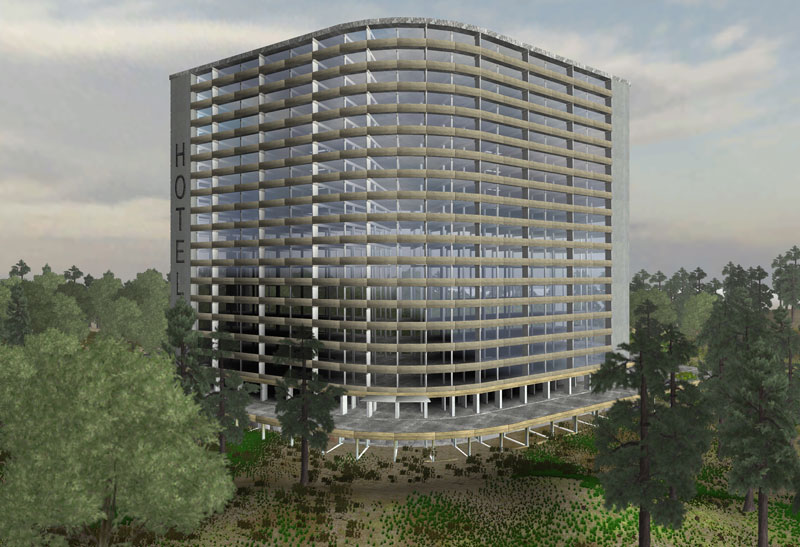 Context: September 2008. The large Vrijbroekpark on the outskirts of Mechelen provides an escape from the carefully preserved, picturesque inner city. Famous for its beautiful horticulture, especially the award winning rose garden, the lush greenery also harbours a public secret: the concrete outline of a huge unfinished building, reaching three stories high. Its construction was apparently interrupted and is now overgrown and dilapidated. Cigarette buds, bottles, campfire remains, graffiti and other traces of human intervention suggest that at least some people are familiar with this place. One can imagine children using it as a cavernous adventure site for fantastic discoveries, or teenagers having their first forbidden romantic encounters here. At some point, even a model photographer turns up to use this hidden place as a set for a nude photo shoot.

Photos from the site in Mechelen

But when asked, very few people from Mechelen seem to know about the ruin of monumental proportions in their midst. Those who do, vaguely remember a grand scheme for an imposing park hotel, but there is no consensus on who or what brought about its evident downfall. Rumours and local myths speculate on a range of different causes: the building was being erected on marshland and already started to subside when construction work was only just under way; swamp ghosts resented any activity on their grounds; the construction mafia was caught dumping bodies in the wet cement of the building’s foundations; the proprietor proved to be untrustworthy and the investors withdrew their funds. None of the stories accounts for the fact that the ‘sunken hotel’ or ‘ghost hotel’, as the skeleton is called in the local vernacular, was simply left to exist in its unfinished state for all the years since, and to be quietly forgotten.

The city archive has not preserved any record of what must have been a very prestigious project. With great effort, one single document can be found in the database of a local newspaper: an artist’s impression of the original building plans, published in 1969. It shows a gigantic modernist high rise of nineteen floors, complete with an elevated parkway busy with cars and visitors coming and going – a grand urban vision for the provincial town of Mechelen. 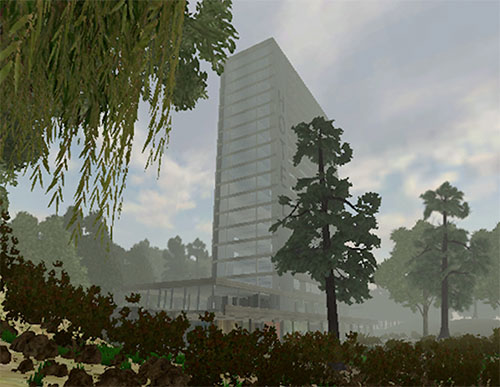 The Free World takes a two-dimensional drawing as the starting point for a three-dimensional computer simulation of the park hotel, which merges the original plan with the current state of its ruin. This updated artist’s impression shows the building in its full, majestic height, but the cement and marble surfaces on the ground and first floors already bear the marks of the graffiti and rampantly growing weeds that can be found on the site today. Bushes and trees have encroached uncannily close upon the terraces and windows, prohibiting passage and preventing any view.

The virtually resurrected ghost hotel was not only a reconstruction of a failed utopian scheme that belongs to a forgotten past and closed history, but it also invited speculation about megalomaniac property development projects across the world being abandoned because of the recent financial crisis, as well as about the fate of future grand scenarios. The updated image of the ghost hotel was also distributed around the city of Mechelen in postcard format. The postcards were adopted by local action groups, and used in their campaign against a new giant construction project in the city by a European mega store chain. 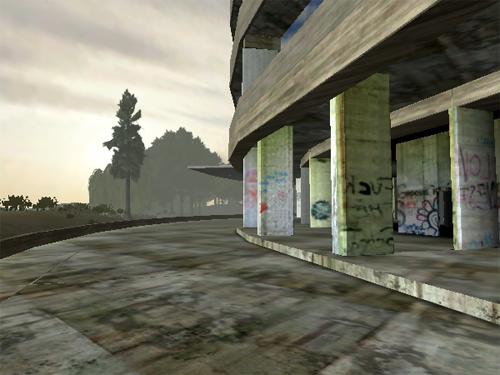 Both images above: stills from the simulation

The Free World consisted of a website (not active anymore), A5 postcards and a banner.
Realisation of the simulation: Gon Zifroni
Commisioned for: Songlines, Mechelen, BE