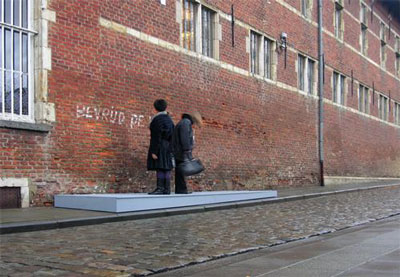 At Zwartzusterstraat in Leuven, on the brick wall of one of the ancient university buildings, close to the university’s Medical Centre, someone has written in large, white lettering: ‘Bevrijd de waanzin’, Liberate the madness. This was the motto of the anti-psychiatry movement in Belgium, which was part of the larger critique of social structures that swept across Europe in the 1960s and 70s. Though exposure to sun and rain has faded the paint, the text’s message has persisted until today.

Liberate the Madness involved the proposal to erect a permanent stage on the pavement in front of the written statement. It was realized as a temporary public intervention. The stage could be seen as a pedestal for the text, elevating it to an epitaph commemorating a significant moment in the history of the city. But it also invested everyday life in the street with a moment of theatricality: whether they realized it or not, any passer-by momentarily became an actor on this stage, whose actions would temporarily be cast in the light of a call for behaviour which is normally denounced or self-censored to be unleashed.

Produced for: 'Resonances; or How one reality can be understood through another'.
Curated by: Astrid Wege
Location: STUK, Leuven, BE

Background: The anti-psychiatry movement strove to redefine our understanding of madness and normality. It rejected the medical model of mental illness, which located the cause for madness in the sick or degenerate brains of mad individuals, and sought to manage madness through institutionalisation and medication. Instead, the movement shifted attention to the role of society. The deviant behaviour that gets labelled insane – one of the leaders of the movement, R.D. Laing suggested – does not have a biological origin, but is a perfectly sensible strategy individuals develop in order to live in unlivable situations. For those who care to listen, it is even a meaningful response to reality. Leuven was home to the key figure in the Belgian anti-psychiatry movement, the beloved and controversial psychologist and criminologist Steven de Batselier, who spent his life pleading the rights of different groups of social outsiders.

It is normal man, Batselier claimed provocatively, who behaves psycho-pathologically. He is deluded by his feeling of comfort and safety in a society that is actually inhumane. The social structures, represented by school, church, law and medicine, restrain the individual, robbing him of that which makes us human: the ability of each concrete individual to be him- or herself. Abnormal people, Batselier proclaimed, are those who do not adjust to these structures, refuse to identify with them, and thus come into conflict with society. This conflict is not only a crisis of the individual, but it could also be understood as the inevitable occurrence of the pathological social structures themselves being brought to a crisis.

But, Batselier and Laing observed, society immediately represses those who refuse to play the limited roles it allows, by forcing them into another role: the marginal role of a delinquent or madman, who is censored from public life and submitted to enforced adjustment. Labelling someone as ‘mad’ is thus not a biological but a social fact, and this social fact is a political event – an act of moral judgement, that serves to maintain a certain social order. The motto ‘Liberate the madness’ therefore calls not so much for a different view on madness, but for a different society. The illicit action of writing on walls can also be seen as a response to the laws and norms that govern public space and public behaviour. Perhaps there is even a correlation between the restrictions to what can find political representation or open expression within a society and the density of comments, tags and graffiti that irrupt its streets.