Plakatieren Verboten! involved a relocation of poster leftovers, collected over three days across the city of Regensburg. They were reassembled into a collage that formed a colourful screen on the large windows of the temporary exhibition space of K2H, housed in the former promotion offices of the Regensburg European Capital of Culture campaign, which became vacant when the honorary title went to rival city Essen and the post-industrial Ruhr area.

At this central location, the collage of poster snippets triggered intense reactions. Local shop owners filed a littering complaint with the authorities, claiming that the project was unsightly, and did damage to the image of the city as well as business. They demanded its imminent clearance. Others vehemently protested against removal, raising uproar and debate in the city hall and the local media, even demonstrating on site, appropriating the visual language of the project. Many reactions defended the collected scraps in the name of art, pointing out that a city that had proclaimed it deserved to be recognized as a capital of culture ‘both traditional and modern’ should be able to stand the test of tolerating this art project. Others saw the impulse to censor the collage as a political event that confirmed the fact that, in effect, fly-posting policies privilege commerce and limit non-commercial organisations in reaching an audience. 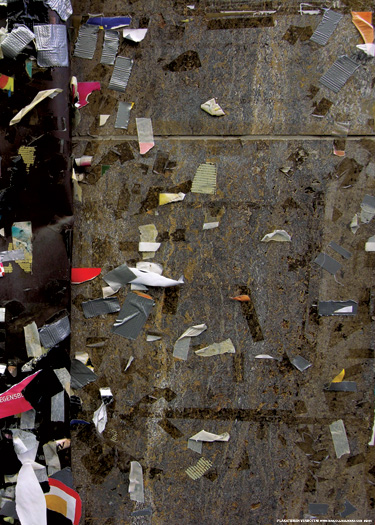