The Layered Generosity of Marjolijn Dijkman

For nearly two decades, the prolific practice of Dutch artist Marjolijn Dijkman has produced a diverse oeuvre of sculptures, films, and installations. Her artworks are evocative entities, inviting contemplation and encouraging the associative meandering of the mind. Yet these generous pieces do not merely glide over the surface of things; they rather challenge what we think we might know, all the while avoiding didacticism or pedantry.

After graduating from the Gerrit Rietveld Academy in Amsterdam in 2001, Dijkman’s films, installations, and interventions were by and large dominated by concrete, often site-specific themes such as the right to communicate in public space (Plakatieren Verboten!, 2006), the authenticity of the Dutch landscape, ‘real’ versus man-made nature, and use value (Forest, 2001; All Alone Among the Stars, 2010), and the cultural understanding of global trade, 2010). Toward the end of the 2000s, Dijkman began to zoom out, from her position in Europe, in order to capture the background against which such local-but-global topics can be understood. Her works began to address broader themes relating to the overarching conundrum of how we, as a human species, relate to the world and the universe around us.

To avoid talking about everything – and therefore nothing at all – “relating to the universe” can be broken down into relations of knowledge, influence, prediction, and extraction. These relations are closely intertwined: the quest for knowledge brings with it the desire to predict and the power to influence; the quest for influence and power involves claiming natural resources and land, extracting from the earth’s richness and causing ecological imbalances. Both history and the present show us that these come with clear gains for a subset of humanity and great losses suffered by other communities and cultures, and by nature itself. 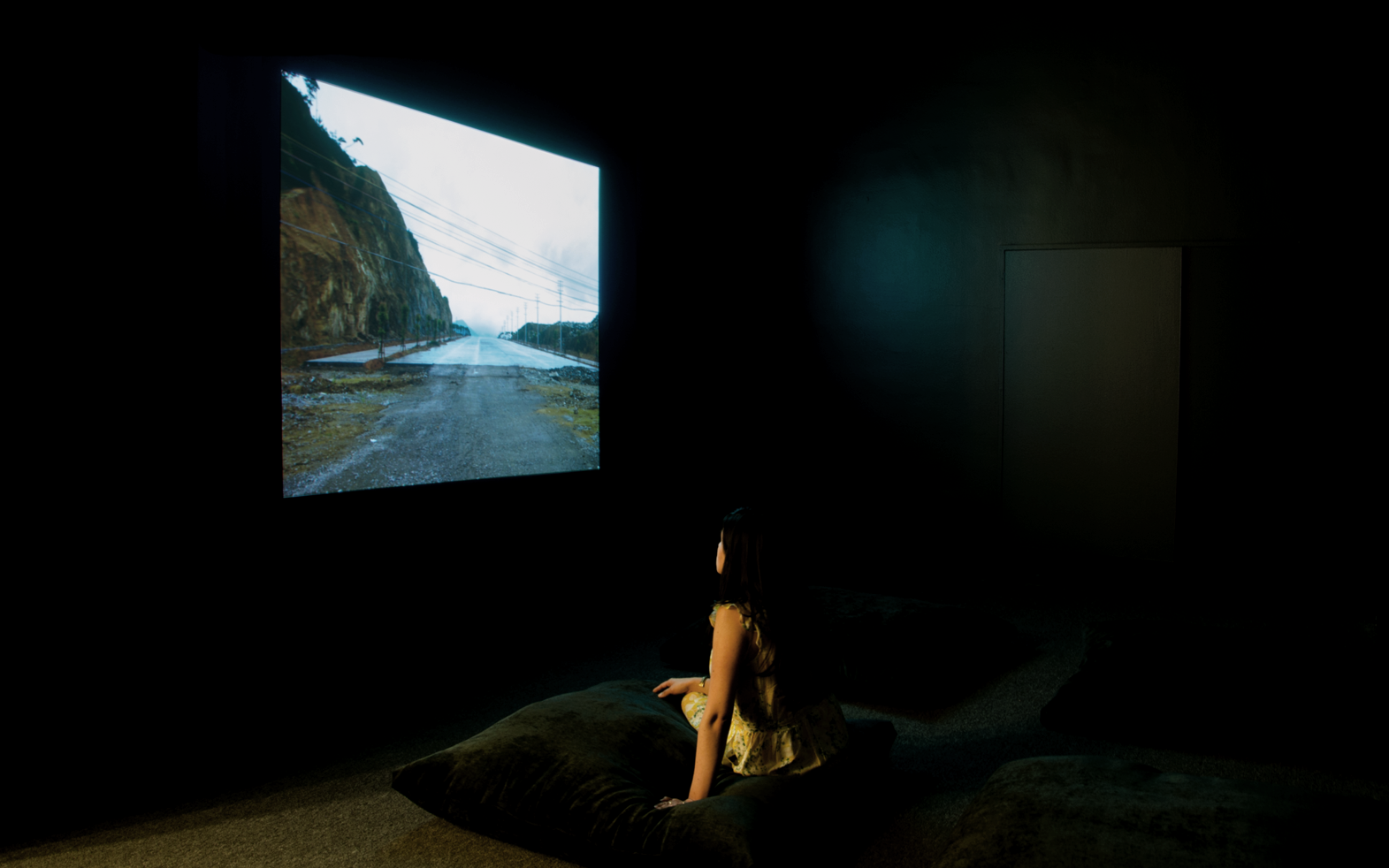 A key work for understanding these relations is Theatrum Orbis Terrarum (2005–15). A decade-long cornerstone of Dijkman’s practice, the work comprises a collection of photographs that observe how people organize their living environments around the world. As with many of the artist’s works, the title is telling: it references the first modern atlas compiled by Abraham Ortelius in 1570, anchoring the piece within a specific cultural and scientific history. Dijkman’s Theatrum Orbis Terrarum is not however an atlas of landscapes and territories, but an atlas of the ways in which humans relate to the world they inhabit. The focus on the relational is made apparent through the idiosyncratic scheme of categorization: all typical context-specific data that would allow us to understand the photograph in time and space is omitted. Instead, the cataloging system is organized according to human actions – ‘adapt,’ ‘control,’ ‘demarcate,’ ‘embrace,’ ‘honour,’ ‘profit,’ ‘speculate’ – effectively reducing anything referenced to a product or result of human intervention.

In spite of our actions the universe, the limit of our knowledge about the universe, within the dominant scientific knowledge system, is made apparent in Composition of the Universe (2011). Mathematician Martin Lo invited Enough Room for Space (the research-focused, collaborative art initiative founded by Dijkman along with Maarten Vanden Eynde in 2005) to make a visualization of the current dominant model of the universe, consisting of 74 percent dark energy, 22 percent dark matter, and 4 percent normal matter, or atoms. The piece invites the viewer to reshuffle its shapes to create equally complex universes. If at the moment there are scientific explanations for the workings of only 4 percent of the universe, the potential compositions are endless. 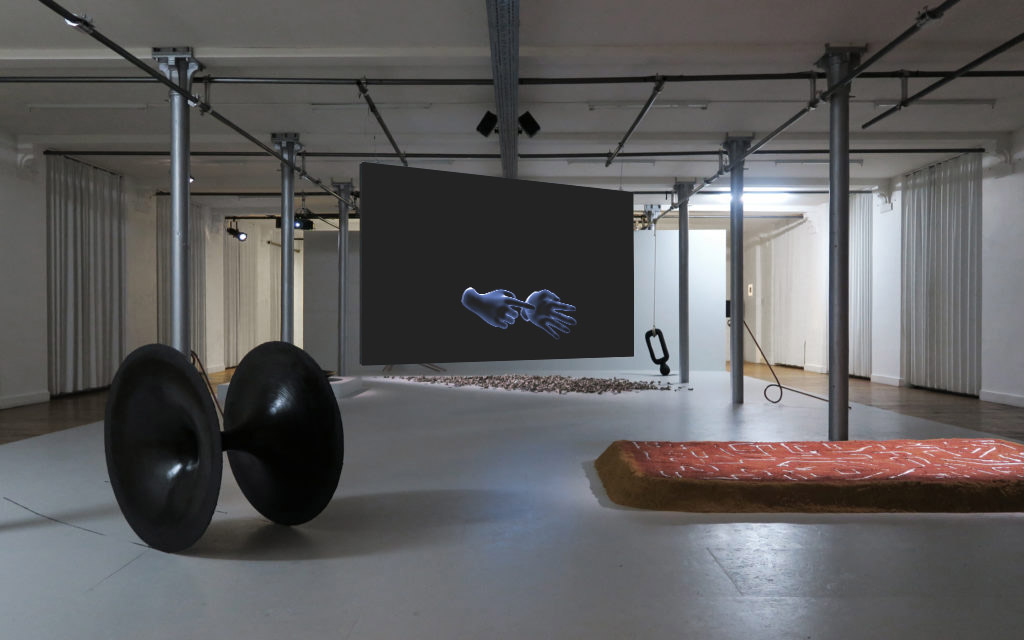 Cultivating Probability, ARTEFACT 2017, The Act of Magic, Leuven, BE

Our systems of knowledge are not, of course, limited to those dominant scientific models. In Cultivating Probability (2015) and In Our Hands (2015) Dijkman embraces alternate knowledge systems via an interest in future forecasting and influencing. Some of the objects in Cultivating Probability are reinterpretations of ceremonial objects found in the collections of the Museum Volkenkunde (Museum of Ethnology) in Leiden and the Africa Museum in Berg en Dal, which were made to predict – or ward off – the future. Other objects are inspired by historical and contemporary things, rituals, or technologies similarly held as predictors of the future around the world. The objects’ shapes might be recognizable, the material references clear, but their size suggests an otherworldly user. Their enlarged size makes them uncanny, familiar and unfamiliar at the same time, attractive yet slightly disturbing. In the dual-screen moving image work In Our Hands, Dijkman choreographs a sequence of hand gestures derived from spiritual, political and military contexts, again developed to foresee or heal the future. Devoid of context and projected on both sides of the screens, from one side the hands could be an extension of the viewer, and from the other, they seem to reach out to them. The accompanying sound piece is a composition made of eighteen computer-generated binaural tones, which act upon brainwaves. Alternative medicine communities have claimed that these beats can help induce relaxation, meditation, creativity, and other desirable mental states.

Indeed, Dijkman’s artworks are themselves intellectually stimulating – even when binaural tones are not used. What emerges throughout the artist’s practice is a call for a kind of modesty: a modesty that includes embracing the unknown, accepting the existence of alternative knowledge systems, and taking into account the invisibles made visible, and the invisibles which remain. In this light, the will to place ourselves as homo faber at the center of the universe appears absurd. In Blue Marble (2008), Dijkman summarized modern societies’ extractive relation to the planet in a three-minute animation: a tiny, yet equally arrogant retaliation. 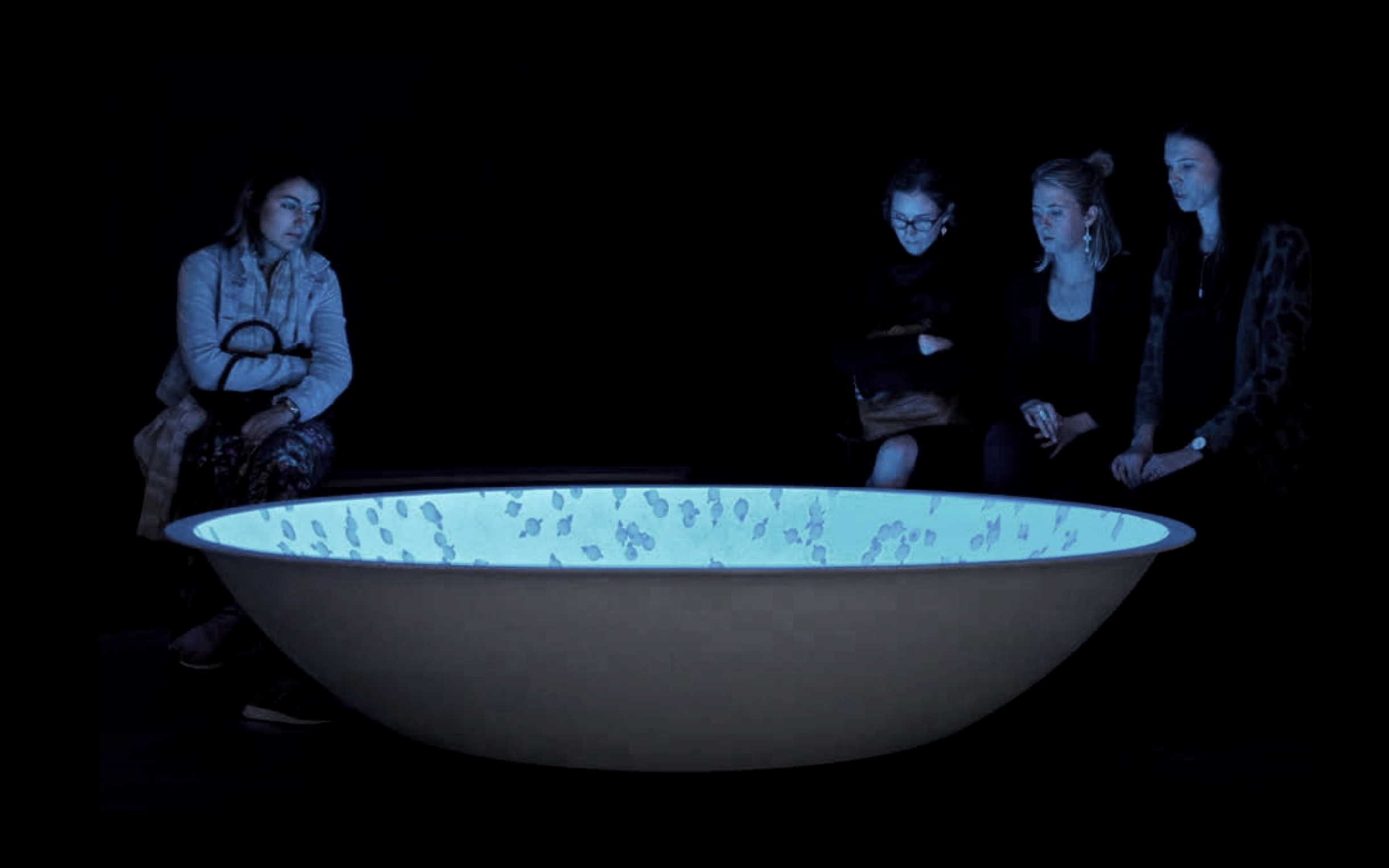 Turning to her most recent works, as presented in her solo show at NOME in Berlin, a slight shift can be perceived from the overarching question of our relation to the universe toward the evermore pressing concern of climate-change ecology and life in the Anthropocene. Viewing humankind as just one element of life on the planet, Navigating Polarities (2018) focuses on the earth’s continuous dynamism, gravitating toward a harmony within itself. Reclaiming Vision (2018) shifts focus to the biological systems – in particular those invisible to the human eye – that exist alongside and are affected by human life. Microorganisms from brackish Scandinavian water seemingly play the lead role in the film, but their actions are not self-led; they are rather directed in a sequence of scenes, which once again acknowledge and interrogate our self-proclaimed position as puppet masters. These latest works raise the question, as per the inquiry of science-fiction writer Kim Stanley Robinson: Can we live a good Anthropocene? [1]

This text is commissioned by NOME for the catalog accompanying the exhibition 'Navigating Polarities', December 2018